I am a Native Texan with deep roots in my state. I am finishing my paperwork to become a full member of the 120 plus year old Daughters of the Republic of Texas, Martin Wells, Round Rock Chapter. My history in Texas begins when my family arrived in what is now Texas before our state was even a Republic. Way back then Texas was part of Mexico called Coahuilla y Tejas and settlers often referred to the area where immigrants had their land grants as New Mexico. Immigrants to Texas back then obtained land from the Mexican government and were required by that government to practice Catholicism. Among these earliest ancestors are Anton Menke Pieper and Elizabeth Dedich, his mother. 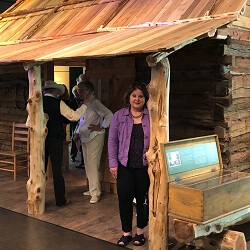 Anton’s adopted father Peter Pieper was an early Texas land promoter and co-founder of Frelsburg in Colorado County, Texas. Peter was born around 1793 and married Elizabeth Dedich Menke (a widow with her son Anton) in 1826 in what is now northern Germany. Peter Pieper was a brick mason and immigrated to Texas in 1833. He was granted a league and a labor of land in 1836 in Stephen F. Austin’s colony and an additional 320 acres as bounty for military service after the Battle of San Jacinto. The family were involved in the Runaway Scrape.

On April 27, 2018, I attended the Grand Opening of the San Felipe de Austin Texas Historic Site Museum where Peter Pieper’s cabin is on display.

Another family member here when Texas was a Republic was Valentine Hoch who came into Texas at Indianola and then built a home in what was to become Hochheim, Texas not far from the Guadalupe River in DeWitt County Texas. Hoch’s home later became known as the Stagecoach Inn along the Indianola to Austin Texas stage coach line. The Valentine Hoch home is a Museum House and is the namesake of Hochheim Prairie Insurance. See more about these 2 Texas Museum Houses on my Texas Museum House web page. 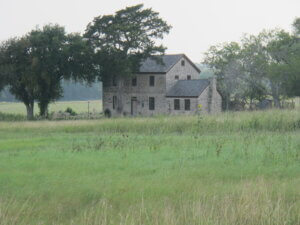 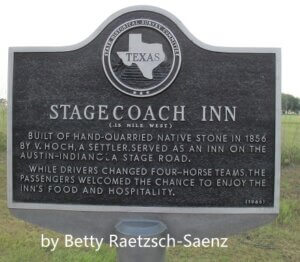 My Swedish ancestors settled in Travis County about 1871. Corporal Ax is one of the first signers of the New Sweden Lutheran Church Book at 12809 New Sweden Church Road in New Sweden, Texas, Travis County. The 120 foot high copper spire is one of the things that makes this church one of the most photographed historic churches in Texas. Look for the church now with a Manor Texas address. What is now the Texas Historical Commission was once an early Swedish Lutheran Church where my mother, Edna (Axell) Sandstrom and my grandparents attended. My grandfather, O. W. Sandstrom was an attorney in partnership with David C Gracy. Gracy Title is still in business in Austin, Texas today.

I’d love to hear of your family history! Even if you have been in Texas only a short while or are just planning to move to Texas, I can help you. Call Betty Saenz at 512-785-5050 or e-mail Betty Saenz Certified Historic House Specialist to buy or sell your own Texas Historic Home. I have Texas Pride and will be your Expert Guide.