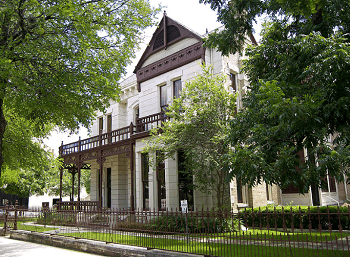 Sometimes called the “Aggie Embassy”, the Hirshfeld House most recently housed the Austin offices of the Texas A&M University System from 1987 to 2016. It was built in 1887 for the banker and merchant Henry Hirshfeld and his family. The complex sits on a half city block on West Ninth Street between Lavaca and Guadalupe streets. It includes the Victorian mansion filled with beautiful antiques, an older honeymoon cottage, and a traditional two-story carriage house in the back.

Texas A&M decided that they had outgrown the buildings in 2016, and moved to the new St. David’s Foundation building. They’ve decided to sell the property. The Hirshfeld is protected by a deed of covenant with a previous owner, the Heritage Society of Austin, a nonprofit group now called Preservation Austin, binding future owners from destroying the property. It’s also in the Capitol View Corridor, so no one could building anything too tall to replace it anyway. The home is also on the National Register of Historic Places, a Texas Historic Landmark, a State Antiquities Landmark, and a City of Austin Landmark.